A Breakthrough E-Fabric Kicks Off a Cascade of Innovation

Article
A Breakthrough E-Fabric Kicks Off a Cascade of Innovation

DuPont’s Intexar™ stretchable circuitry is game-changing. So is the new business the company built around it.

Michael Burrows and other DuPont materials team members knew they had cracked a real challenge: Everyone from doctors to expectant mothers to professional and weekend athletes were clamoring for more data about their bodies, part of a growing health trend. His team’s product delivered that data — with a shirt.

What Burrows didn’t expect was the reaction when he unveiled the shirt at the emerging tech show IDTechEx in Santa Clara, California. The typically skeptical crowd lined up four-deep at the DuPont booth to get their hands on a fitness-monitoring garment with Wi-Fi connectivity, made with stretchable electronics — an industry first.

Yes, it’s stretchable; yes, it’s washable, the team told showgoers one after another. It was November 2014, and the team was introducing the first clothing made with Intexar™, a groundbreaking version of DuPont’s printable electronic ink. Intexar™ makes it possible to incorporate circuits into fabric that can fold, fit and stretch — and even go through the laundry unscathed.

Some 95 percent of smartphones already contain DuPont electronic materials; now the company is positioned to take the lead in e-clothing substrates, too.

That first shirt, produced in partnership with Finland-based Clothing Plus (now owned by Jabil) and Silicon Valley’s Maxim Integrated, was the culmination of several years’ work by the team. Burrows and his engineers had seen the market for wearable electronics, such as smartwatches and fitness monitors, growing exponentially. They saw that clothing embedded with electronic monitors would not only give customers what they needed but presented an opportunity to take an entire emerging category to a new level.

“Everyone assumed you couldn’t put these electronic inks in a washing machine. We gave it a whirl anyway — after passing the wash test, the team knew it had something special.”

Four years ago, fewer than a million units of smart clothing shipped worldwide; today, one forecast predicts global sales will total $1.18 billion by 2025 as the Internet of Things expands to connect more than 75 billion devices.

DuPont had been making flexible circuitry for decades, but manufacturers wanted electronics in clothing to stretch, snap back to size and survive exposure to the elements. Burrows and his team figured that if they could rise to those customer challenges the possibilities were almost limitless. “Intexar™ lets you inlay the same types of circuits you’d see in a smartphone into soft fabric,” Burrows says. The introduction of Intexar™ kicked off a cascade of innovative ideas with big implications for consumers in sports, health care and beyond. 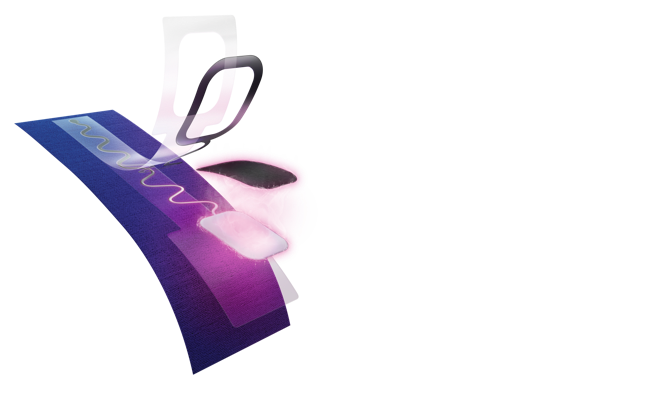 DuPont seized on the surge of interest to reconceive the way the company works with customers, launching a new expedited, collaborative prototyping service in Taiwan this year. The goal: to help customers use Intexar™ to create a wave of cutting-edge products and accelerate their path to market.

“Intexar™ is going to drive more and more product innovation,” Burrows says. “If DuPont isn’t set up to help our customers improve their ideas, we’re going to lose that essential innovation engine.”

Almost as soon as the trade show ended, a flurry of prototype ideas from potential customers around the world hit Burrows’ inbox. “They were coming in from Singapore, France, South America, New Zealand, from big companies to individual Gmail accounts to researchers at institutes,” he says. “ ‘Why don’t we make a sock that does this? Why don’t we make a diaper that does that?’ And it hasn’t stopped since.”

DuPont responded by ramping up a new team of design engineers who work hand-in-hand with customers to bring their ideas to reality. The prototyping operation is based in Taipei, the capital of Taiwan. “You don’t just call us and get a roll of film and a jar of electronic ink,” Burrows says. “You call us, and in five weeks we’ll make you a customized printed Intexar™ part that you can press on your clothing.”

Speed is crucial. Prototypes go through several design iterations before manufacturing can begin, and DuPont’s engineers are there every step of the way. “This arrangement is very specialized,” Burrows says. “To be at the crest of the wave of a brand-new technology is a big deal.” The new service aims to keep DuPont riding that wave.

Meanwhile, back in the States, DuPont has assigned a team of crack scientists to keep improving Intexar™ inks and the film on which they’re printed. “We rapidly increased the pace of innovation,” Burrows says.

Small steps to a big stretch

The potentially world-changing ink started in a DuPont lab in Research Triangle Park. Burrows recalls the first big leap in their findings: realizing that some of DuPont’s flexible electronic inks, around for decades, could not just bend but also stretch while maintaining conductivity. “Everybody said that was impossible,” he recalls, noting that the ink is made of silver particles that resemble microscopic cornflakes. “The assumption was that if you stretch them apart the print would lose its conductivity immediately. But we found that by choosing the right ‘cornflake’ dimensions, and the right resin in between them, maintaining conductivity isn’t impossible — it actually works quite well.”

The second leap was developing a heat-transfer process similar to the one used with iron- on patches that could bond the ink and film to standard synthetic textiles. DuPont scientists have improved Intexar™’s elasticity to the point that a fabric embedded with it could be stretched to twice its normal size and still cycle back to the original size and fit. “We spent a year finding a high-recovery polyurethane film to make that possible,” Burrows says.

Finally, the third challenge: washing the e-clothing. “Everyone assumed you couldn’t put these electronic inks in a washing machine,” Burrows says. “We gave it a whirl anyway — after passing the wash test, the team knew it had something special.”

The takeaway from the innovation process, he says: “Test your best ideas, not your best assumptions.”

Currently, smart clothing with Intexar™ is being tested by pro sports teams. The medical industry is exploring it, too: DuPont has created a “smart health patch” that promises to make it much easier and cheaper to monitor a patient’s vital signs and detect early warning indications. In a 5G world, it could even continuously and comfortably connect patients at home to remote monitoring systems.

Intexar™’s biggest public splash has been the Owlet Band. At this year’s Consumer Electronics Show, the company introduced an Intexar™ abdominal band worn by a pregnant woman to monitor her fetus. It won the show’s Wearable Technology award — usually awarded to a smartwatch — and was an honoree in Tech to Change the World.

Expectant mothers are excited about how Owlet could give them peace of mind during their pregnancies and a new window into their health and that of their coming baby. “It’s hard to believe you could contribute to that as part of your day job,” Burrows says. “You can imagine how empowering that feels.”

The Search for Mood Microbes